YORK HAVEN, Pennsylvania (April 13, 2011) – James CRAFT & Son, Inc., has been awarded Accredited Quality Contractor (AQC) status by Associated Builders and Contractors (ABC) for 2011. According to ABC, an average of only three percent of the 15,000 eligible contractor members achieves this honor. James CRAFT & Son has maintained this accreditation for 18 consecutive years, since the AQC program’s inception in 1993.

YORK HAVEN, Pennsylvania – James CRAFT & Son,, Inc., York Haven, is currently installing the plumbing and heating, ventilation, and air conditioning (HVAC) systems in a new, five-story student residence hall for York College of Pennsylvania. The $2 million project is to be completed in August, allowing students to move in for the fall semester.

Jeffrey Murry has been chosen as the CRAFT project manager at the job site. Michael S. Kearns estimated the job.

York College of Pennsylvania is a private liberal arts college located on a 155-acre campus in historic York County, Pennsylvania.

PinnacleHealth, a non-profit organization, is the leading hospital and healthcare system in Central Pennsylvania.  For further information, please visit www.pinnaclehealth.org.

PinnacleHealth, a non-profit organization, is the leading hospital and healthcare system in Central Pennsylvania.  For further information, please visit www.pinnaclehealth.org.

Each Graduate Recognized by ABC for Attaining High Honors

Jeff Hanna of Wrightsville graduated from the sheet metal program and was recognized for maintaining a straight-A grade average throughout the entire four-year apprenticeship.

Dan Hetrick of Harrisburg also graduated from the sheet metal program and received recognition for maintaining an A and B grade average throughout the entire four-year apprenticeship.

Plumbing graduate Robert Krebs, Mt. Wolf, was honored for maintaining an A and B grade average throughout the entire four-year program.

Nazmi Meholli of Shiremanstown completed the air conditioning and refrigeration apprenticeship program and was received recognition for his perfect attendance throughout the entire four-year program, as well as an award for perfect attendance in the 2010-2011 program year.

Terry Robinson, Hanover, graduated from the plumbing program and was recognized for maintaining perfect attendance throughout the 2010-2011 program year.

An apprenticeship program is a structured system of training, combining classroom instruction with year-round, on-the-job training for occupations in skilled trades and crafts. The Associated Builders and Contractors, Inc. offers apprentice training; however, some members, such as James CRAFT & Son, choose to conduct their own programs to provide personalized and company-specific training for future employees.

YORK HAVEN, Pennsylvania – Drew Doxzon, Project Manager for James CRAFT & Son, Inc., has been announced as the 2010-2011 Craft Instructor of the Year by the Associated Builders and Contractors, Inc. Keystone Chapter for his excellence in teaching the Electrical 4 class, which is offered as part of the ABC apprenticeship program. Doxzon was recognized for this honor at the ABC Keystone Chapter’s 41st Annual Apprenticeship Graduation in Hershey.

Doxzon is the first repeat recipient of this award, having also been recognized as Instructor of the Year for 2004-2005. He began teaching at the ABC Keystone in 2002. In addition to the apprenticeship course, he also teaches the Electrical Licensing Exam Prep Course for ABC. Doxzon is from Stewartstown, York County.

Each year, the ABC Keystone Apprenticeship and Craft Training Committee recognizes one instructor as Instructor of the Year, based on the following criteria:

“Drew is enthusiastic about his trade and this translates into his teaching, energizing his students and motivating them to learn,” said William D. Craft, vice president of service. “We are extremely proud of Drew and his accomplishments!”

An apprenticeship program is a structured system of training, combining classroom instruction with year-round, on-the-job training for occupations in skilled trades and crafts. The Associated Builders and Contractors, Inc. offers apprentice training; however, some members, such as James CRAFT & Son, choose to conduct their own programs to provide personalized and company-specific training for future employees.

This month, James CRAFT & Son, Inc. was recognized by the Associated Builders and Contractors’ (ABC) Keystone Chapter for its long-term commitment as the company celebrates its fiftieth membership anniversary with ABC Keystone. This milestone marks not only a commitment to the construction industry, but also many contributions that have helped to advance the industry during the past 50 years.

Cindy Field, vice president of ABC Keystone, commented, “The Crafts certainly continue to live by the Teddy Roosevelt quote, ‘Every man owes part of his time and money to the business or industry in which he is engaged. No man has a moral right to withhold his support from an organization that is striving to improve conditions within his sphere.'”

“The Roosevelt quote,” Field continued, “is key to what sets [James CRAFT & Son, Inc.] apart from some others. James E. Craft nurtured within his employees and other members of his family the desire and willingness to serve ABC at so many levels – a contribution that will live on for many years to come and help us to achieve new heights of success in the future.”

James E. Craft, whose achievements and services covered a broad range of activities at ABC Keystone, as well as ABC PA (the state organization, now defunct), and National ABC, was quite influential in helping ABC Keystone become the first ABC Chapter in the nation to have its own member designed, financed, and constructed building. He served on the board of directors for 15 years, serving as president (the term has since been changed to chairman) during 1978. He was bestowed every honor for service that ABC provides, including Distinguished Service Award, President’s Award, and Life Membership.

James L. Craft has also served ABC Keystone at many levels, including as president. Vicki Craft Kearns is the current chairwoman of the board, and has served the chapter in the legislative and financial arenas. Fred Craft, Tom Craft, and Bill Craft have all contributed their time and talents to ABC Keystone by serving on various committees through the years.

The fifth generation of the Craft family continues the tradition as Jessica Craft Schlosberg has recently been serving on ABC Keystone’s scholarship subcommittee, public relations committee, and the young leaders task force, and Steven Kearns is serving the chapter through its excellence in construction awards program.

ABC has had numerous committee chairs and committee volunteers from the Craft organization, including some instructors for its management education and apprenticeship programs.

“The Crafts are a gracious, hard-working family,” Field commented. “ABC Keystone has been very blessed by James CRAFT & Son’s membership.”

YORK HAVEN, Pennsylvania – PinnacleHealth, Harrisburg, has awarded James CRAFT & Son, Inc., a $408,000 contract to replace the rooftop heating, ventilation, and air conditioning unit at the hospital and healthcare system’s Community General Hospital location. This project is essential to maintaining the indoor air quality within the facility.

Michael A. Monn, Sr. estimated the project and will serve as James CRAFT & Son’s project manager at the job site.

GANFLEC Corporation has granted James CRAFT & Son, Inc. a contract to install a new air handling unit for its Data Center in Camp Hill, PA. This air handling unit is an equipment package that will be used to circulate air as a part of a heating, ventilating and air-conditioning system. James CRAFT & Son, Inc.’s estimator Karl Arndt composed the bid for this project. Rick Folkenroth will serve as project manager. GANFLEC Corporation is an affiliate of Gannett Fleming, Inc. Gannett Fleming, Inc. is a full service, multi-disciplinary architectural/engineering firm headquartered in Camp Hill, PA, and has 60 regional offices throughout the U.S. 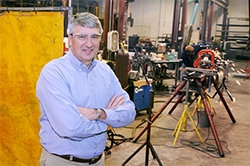